The Mid-Ohio Sports Car Course in Ohio is now another track that I can check off of my bucket list of tracks that I would like to visit. I made the trip during the first weekend of August for IndyCar's Honda Indy 200. It was an action packed weekend as the track also hosted the Indy Lights, Pro Mazda, USF2000, and Pirelli World Challenge series.

I arrived at the track Friday morning and spent the day walking around the track to become familiar with the parts of the track that would offer good photo opportunities for a non-credentialed photographer. I decided that the inside of Turn 1 and the area from the Esses to the Honda bridge would be where I would be spending most of the time for photos. From the point of view of sitting down to watch a race, I think the hill overlooking the Esses offers one of the best views of the track. Television does not do justice to the amount of elevation change in this section of the track. My second choice for watching a race would probably be the hill overlooking the Keyhole.

I liked shooting from Turn 1 because it allows you opportunities to pan with the cars as they go through Turn 1 and as they head down the straight towards the keyhole. I try to incorporate recognizable parts of the track in the backgrounds of my photos when possible to try and give a clue as to what track the photo was taken. For some of the panning shots that I took from this location, I incorporated the flag starter's stand that is located on the back straight of the track. 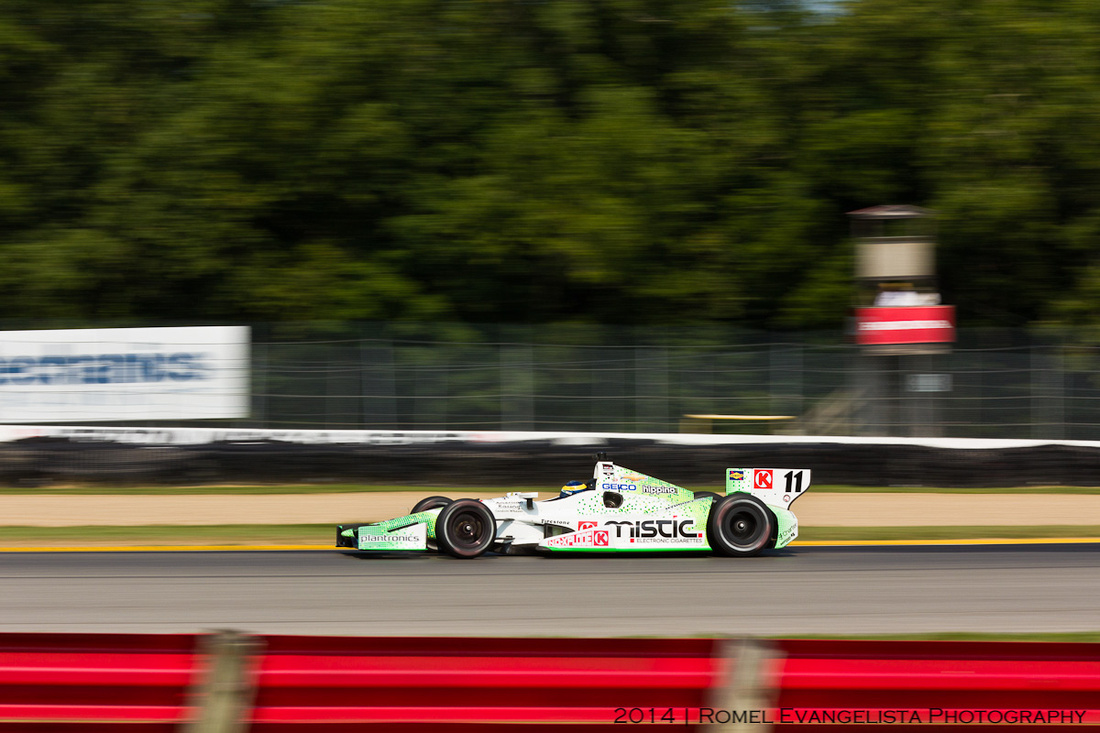 Another reason I liked this part of the track is because the close proximity to the track allowed me to take closeups of the drivers in the cockpit. This is a type of shot that I always try to incorporate when photographing open cockpit race cars. 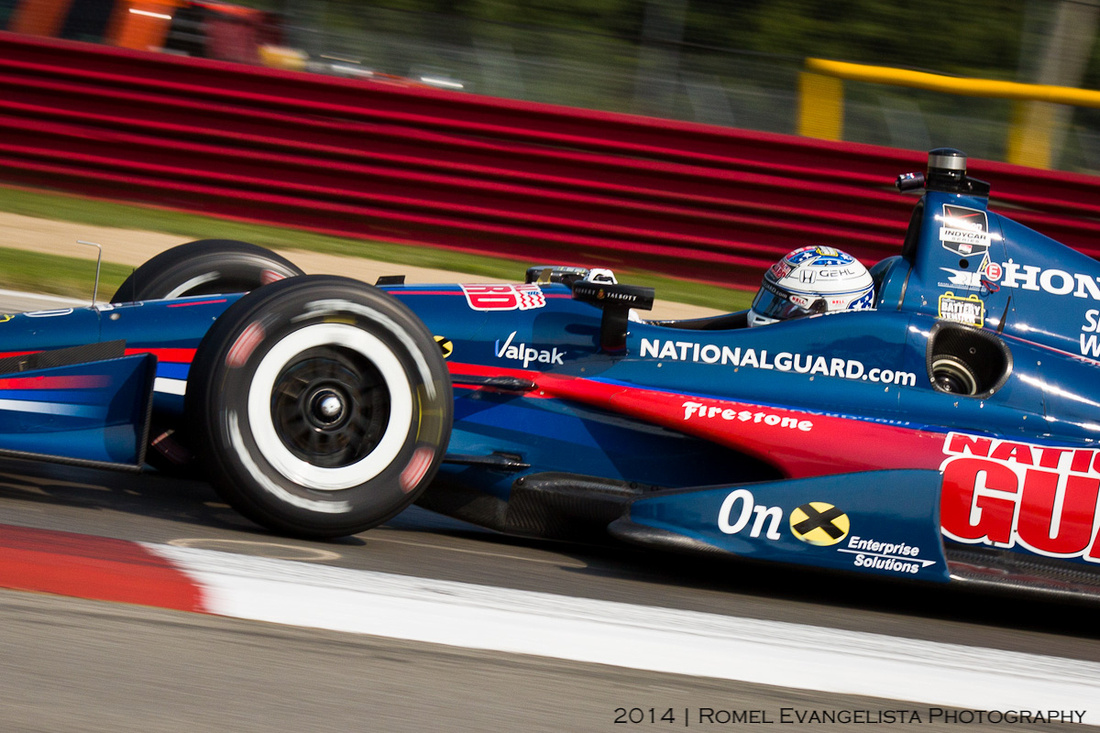 The section of the track from the Esses to the Honda bridge was the other area where I liked to take photographs because it offered many different photo opportunities (close-ups, panning, 3/4 panning). Even though the majority of the track is surrounded with catch fencing, I constantly try to find areas where I can try and shoot through the cut-outs that are made for the credentialed photographers. I was able to find one such hole that allowed me to take head-on shots as the cars crested the lefthander at the top of the Esses. Another area where I was able to overcome the catch fencing was the back straight. I knew that if I panned with the cars, it would minimize the distraction of the catch fence. 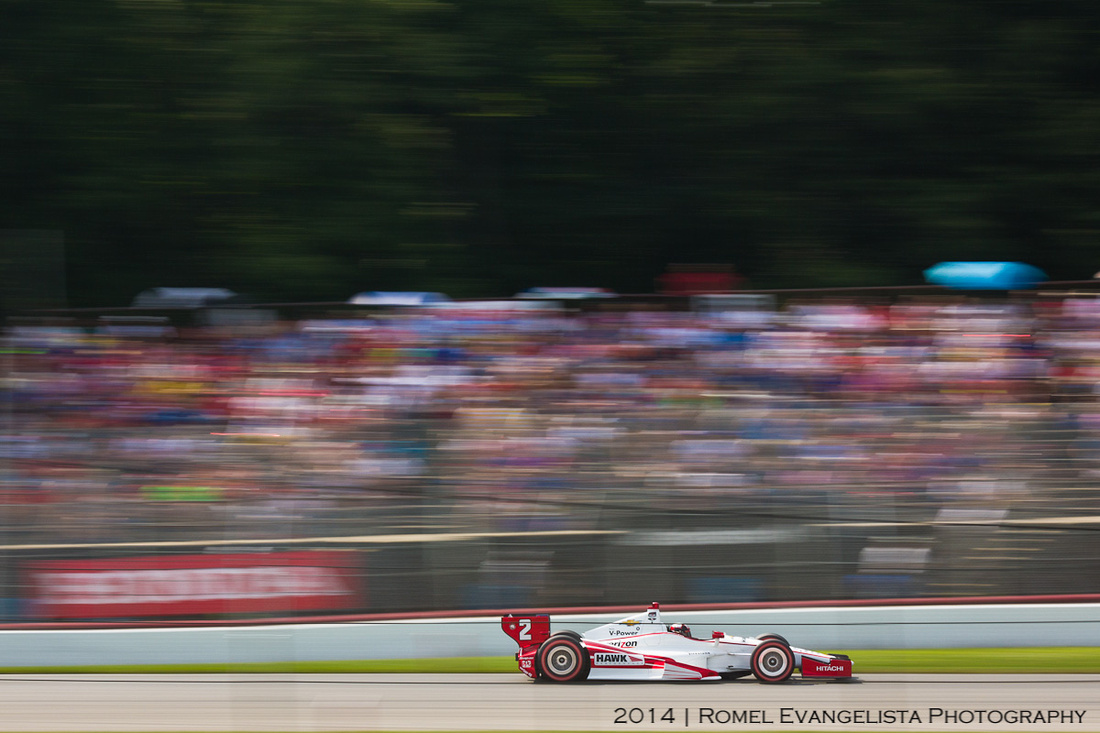 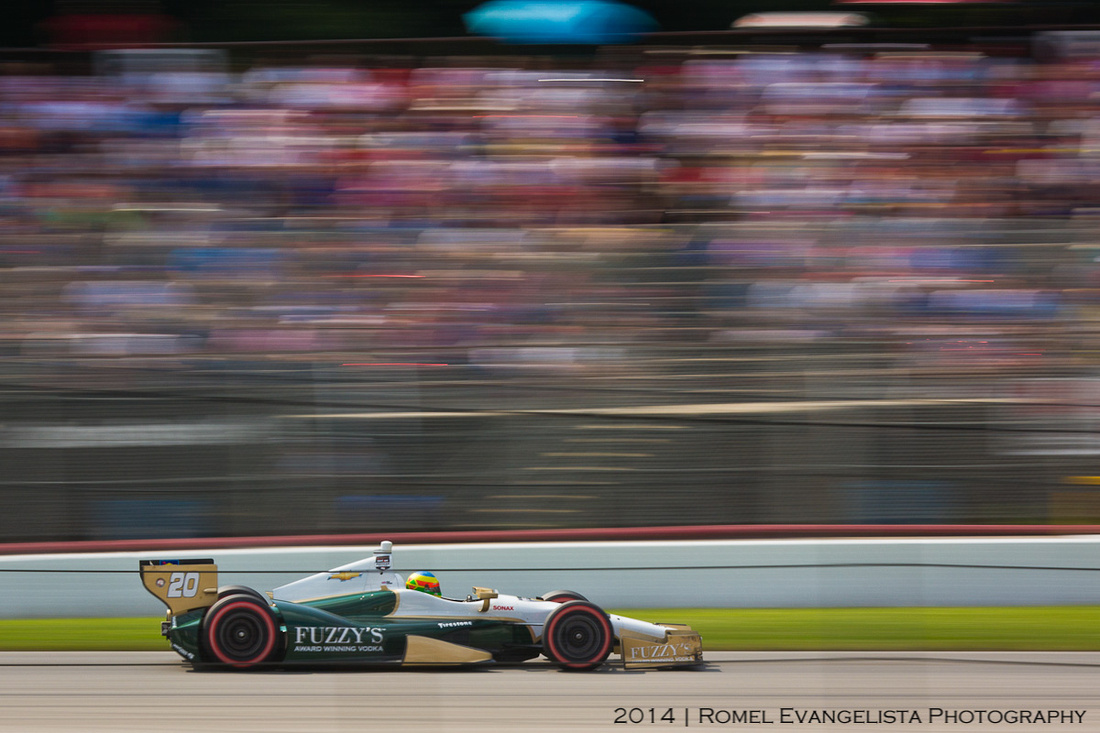 These are shots that I waited until race day to take because I wanted the grandstands in the background to be full of people and color. It just wouldn't have had the same appeal if it was an empty grey grandstand in the background. I also experimented by using the spectators on the hill as a foreground element.

I find it fun to experiment with taking different types of shots because it is so easy to get caught up with concentrating on taking photos of only the cars. I constantly try to challenge myself to come up with something new every time that I go out to a race. Please visit my Honda Indy 200 gallery to see my favorite IndyCar photos from the weekend.

Thank you for stopping by and taking the time to read my blog.