My GP of Indianapolis Weekend

The inaugural Grand Prix of Indianapolis marked the first time that Indycars raced clockwise around the historic Indianapolis Motor Speedway, using a newly reconfigured road course layout. It also marked a couple of firsts for me, my first IndyCar event and my first race at the Brickyard.

I arrived in Indy Wednesday evening to get settled in. The next morning, upon entering the track, I couldn't believe I was actually there. The track is so huge and so full of history. All throughout the weekend I felt like I had to pinch myself to make sure I wasn't dreaming. I spent most of Thursday getting myself familiar with where everything was, and trying to figure out where I wanted to take photos from throughout each day. I typically like to shoot with the sun behind me, so my favorite spots to shoot in the morning were the turn 1 & 2 area, and the turn 7, 8, 9, complex from driver's left. 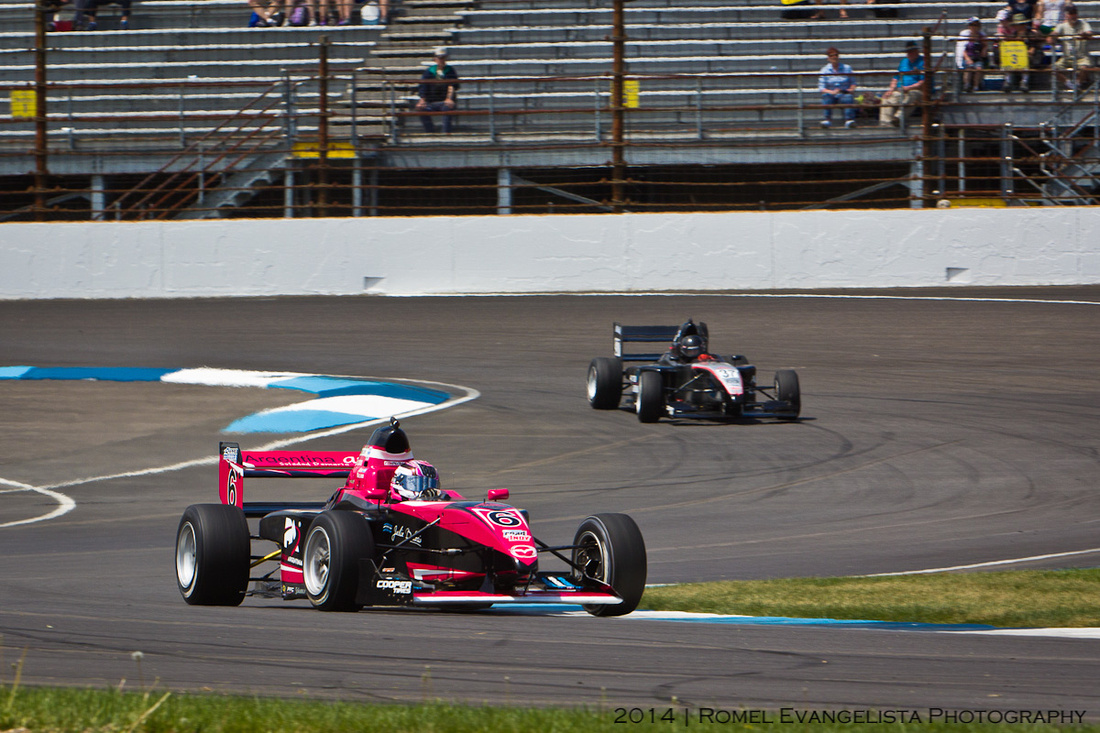 Shooting ProMazda at the Turn 1 and 2 complex. 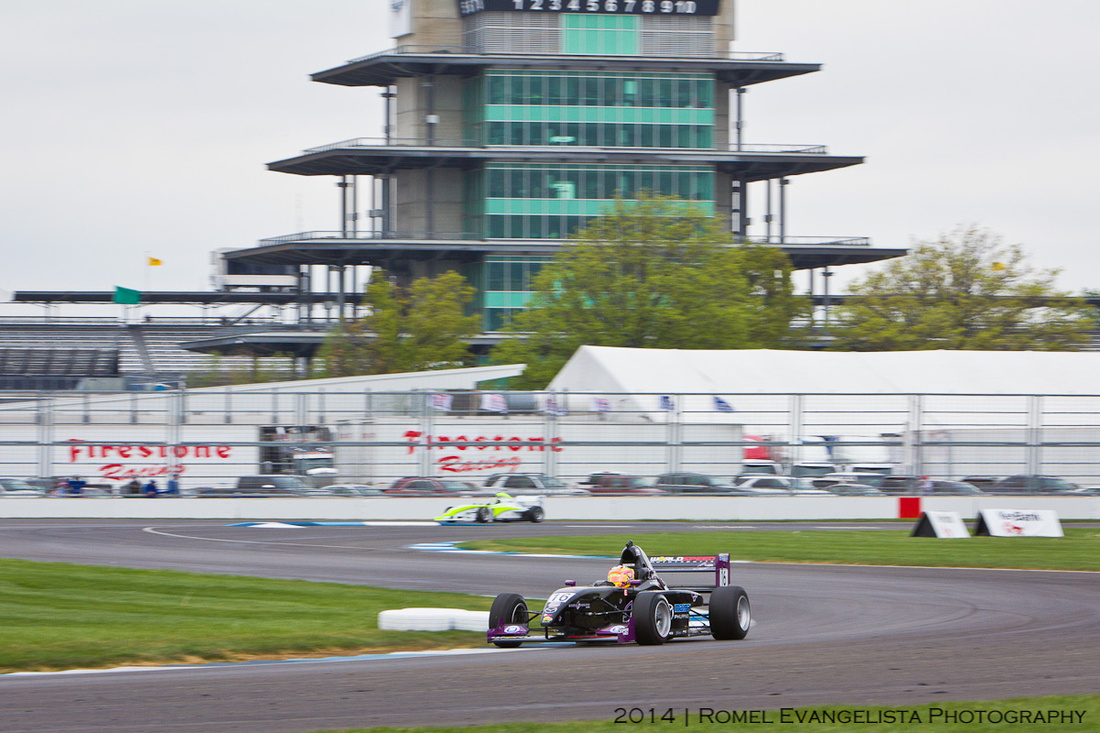 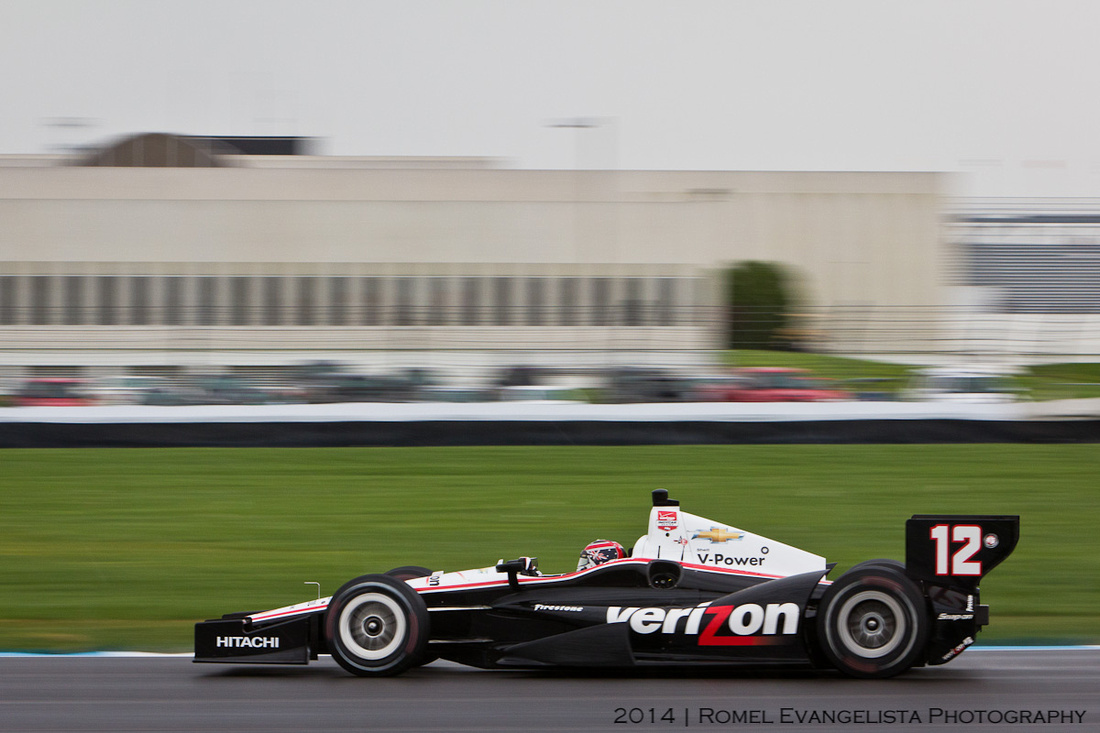 For the Thursday afternoon sessions, I tried shooting between turns 10 and 11 to keep the sun at my back. I really wasn't a fan of shooting in that part of the track because I couldn't find a worthwhile background to work with. Also, since it was the one of the farthest parts of the track from the media center, this was the only time that I ventured out there. I checked out turn 14, but once there,  I wished I had a longer lens to shoot from that vantage point. I took some wider shots with the giant IMS logo in the stands, but I didn't return to that spot for the rest of the weekend. 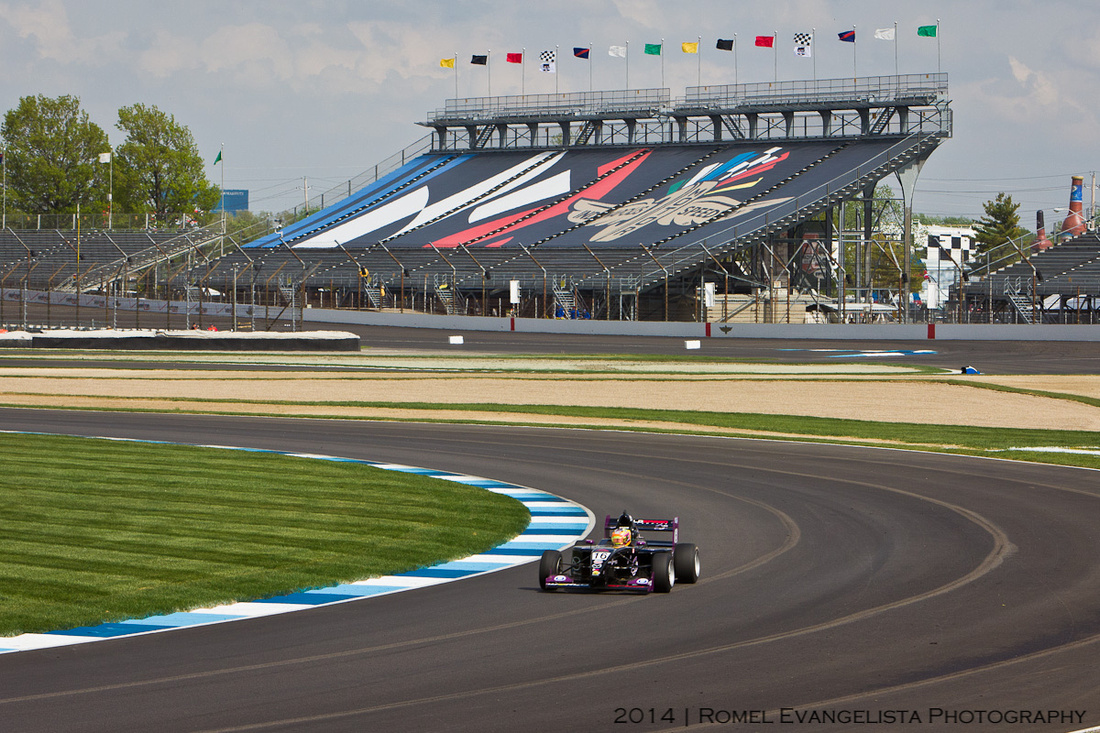 Friday brought rain to the speedway. Rain and the long straights can only mean one thing...rooster tails! I was lucky to have watched qualifying from pit lane to witness the rooster tails as the cars raced down the length of the straight. Earlier in the day I found it funny that it would start to rain at the beginning of every session that I went out to photograph, and stop once that particular session came to an end. IndyCar qualifying would be no different. With the exception of the first group to go out, the rain would start as soon as cars were about to take to the track, with the heaviest rain coming right before qualifying for the Fast 6. Right as that session was about to come to an end, Ryan Hunter-Reay spun coming on to the front straight and backed it into the wall. Two things stood out to me as I witnessed the crash. The delay in seeing the impact and then hearing the impact, and once I did hear it, even though it was a relatively light impact, it sounded a lot worse than any impact that I've heard for any IndyCar crash on television and it is not a sound I would like to hear again.

Saturday, race day, turned out to be a beautiful day. The IndyCar race didn't start until the middle of the afternoon, so that gave me time to look at some of the cars on display in the Pagoda Plaza, and to stop by the Indy Fans Tweet Up. I spent the rest of the morning in the media center before going out to shoot the ProMazda race. Once the race was over, I grabbed lunch and prepared for the IndyCar festivities to begin. Once the grid walk and pre-race festivities were over, I spent my time watching the race from pit lane and turns 1 through 4, spending the majority of my time between turns 1 and 2. Standing on the inside of turn 1 without a view of the front straight, you begin to get a sense of just how long the straights are. It would seem like it would take forever for the cars to reach turn 1 after hearing them accelerate after taking the green flag after a caution period. Turn 1 is probably one of the better parts of the track to watch the race from as it is one of the primary passing zones, and it proved to be very popular with the fans. 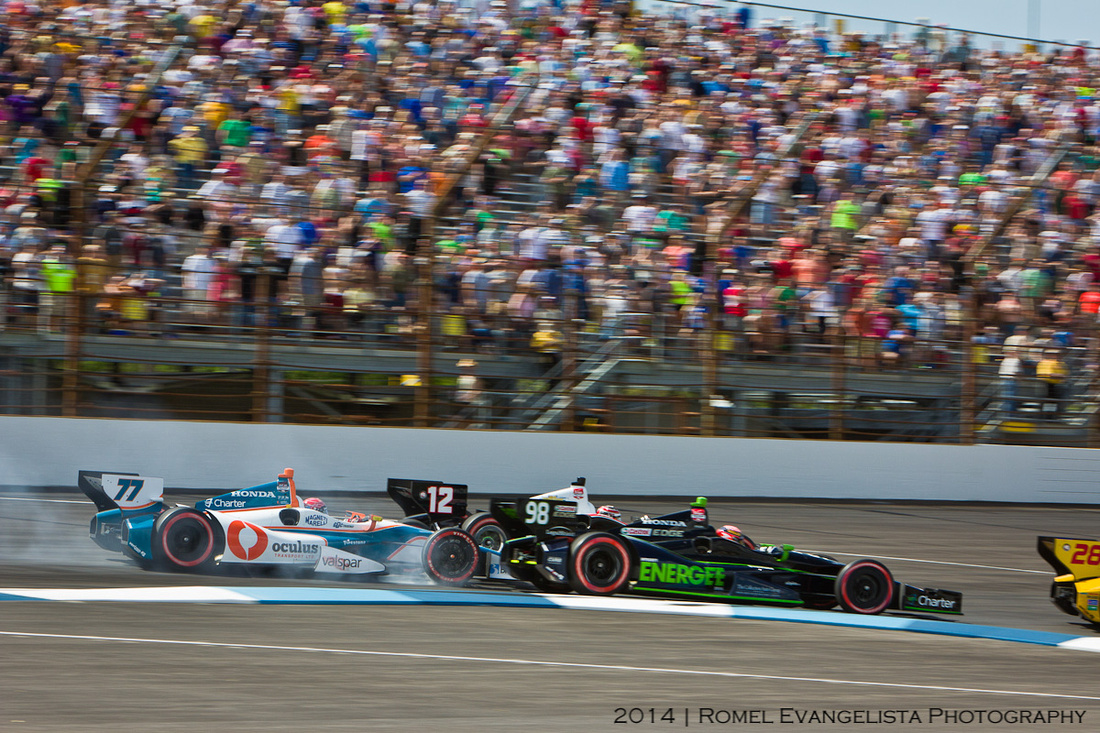 Simon Pagenaud (Schmidt Peterson Motorsports) locks up the brakes at Turn one as he enters three-wide with Will Power (Team Penske) and Jack Hawksworth (BHA / BBM with Curb-Agajanian).

As the race was coming to a close, I headed back to pit lane to see the waving of the checkered flag and the podium ceremony.

I enjoyed my time at the track immensely, and left with memories that will last a lifetime. I look forward to returning for next year's GP, and attending my first Indy500. I'd like to thank Shea Holbrook, #SteelOvaryNation, and the staff of the Indianapolis Motor Speedway for the help and support they have provided to me.

Please take the time to view my IndyCar and ProMazda photos from Indy on my website or Facebook page.